As the world goes ahead through newer challenges at an unprecedented pace, it is the right time for youths to take up the leadership role for the advancement of promising countries like Bangladesh. Any references to young leadership from national or international perspectives make it indispensable to spotlight on Sajeeb Wazed Joy, grandson of Father of the Nation Bangabandhu Sheikh Mujibur Rahman and son of Prime Minister Sheikh Hasina.
Being a highly qualified specialist in the field of information and communication technology (ICT), Sajeeb Wazed Joy is the Prime Minister’s ICT Adviser too.
Bangladesh has attained monumental progress with the expansion of technological services throughout the country. The blessings of technology have simplified the lifestyle of countless numbers of people all over Bangladesh by virtue of Prime Minister Sheikh Hasina’s Digital Bangladesh program which has augmented internet density throughout Bangladesh. Emails, e-commerce, mobile financial services, social media, mobile internet have reached the doorstep of masses in all cities, towns and even the remote areas of Bangladesh. Thus the living standard of people has drastically improved. All these things have taken place successfully by means of the unflinching efforts of Prime Minister Sheikh Hasina and the intellect of her son Sajeeb Wazed Joy.
Joy has succeeded to create an e-savvy generation in Bangladesh.
Bangladesh has in the meantime launched its first satellite into space which is a scintillating milestone for the country. Sajeeb Wazed Joy played valuable roles in bringing about Bangladesh’s glorious entry into the satellite era and the nation’s conquest of space. He has been making immense contributions for the headway of Prime Minister Sheikh Hasina’s Vision 2021 development goals too. Sajeeb Wazed Joy has become another name for hope to Bangladesh’s people. The nation’s rise in the sphere of science and technology would be even difficult to imagine without Joy’s participation in our technological development process. Bangladesh has graduated from least developed countries (LDC) and become a middle income country through the hard work of Prime Minister Sheikh Hasina. We are optimistic that Bangladesh will become a prosperous country through Sheikh Hasina’s endeavours by 2041.
At this moment we are undergoing a tough time triggered by the outbreak of Covid 19. We are hopeful about turning around once the coronavirus menace is over. One thing should be added here that working people all over Bangladesh could continue to do their jobs during the lockdown period through internet from home which has been possible for the digital success of the country.
It’s a demand from all patriotic citizens of the country to make Sajeeb Wazed Joy more profoundly involved with politics so that Bangladesh can obtain the benefits of his youthful enthusiasm, determination, knowledge, integrity and expertise for moving forward. He is capable of holding the country’s helm in the 21st century with his smartness, sagacity, courage and dedication.
It may be added that when Bangladesh Nationalist Party (BNP) was in power from 2001 to 2006, Bangladesh was offered optical fiber submarine cable connection by SEAMEWE 1 for free. Begum Khaleda Zia was Prime Minister at that time. She rejected the offer showing excuse of intelligence leak-out risk. Later on Bangladesh had to purchase SEAMEWE 4 submarine cable connection for a very high price.
Sajeeb Wazed Joy’s intellectual depth and commitment towards the technological growth of Bangladesh have all the prospects to make the country proud by ornamenting it with self-sufficiency in ICT. At the same time Bangladesh will be able to stamp the imprint of its ICT supremacy on the international stage as well in days to come by virtue of Sajeeb Wazed Joy’s merit.
Joy has in the meantime pledged to introduce 5G in Bangladesh before long. His visions about a prosperous Bangladesh remind us of the lofty dreams Bangabandhu Sheikh Mujibur Rahman cherished about Sonar Bangla (Golden Bengal).
Prime Minister Sheikh Hasina has on some occasions applauded Sajeeb Wazed Joy for his in-depth ICT skills and prowess. Bangladesh can certainly march forward at a high speed if the nation is lucky enough to be guided by Sajeeb Wazed Joy in the forthcoming days.
Sajeeb Wazed Joy can pull up Bangladesh to outstanding heights at domestic and international levels if he is provided with the opportunity to propel the country ahead. E-governance is another landmark for Bangladesh for which Joy deserves to be admired. We are highly confident that activities in all offices across the country are going to be faster, smoother and much more transparent through e-governance. 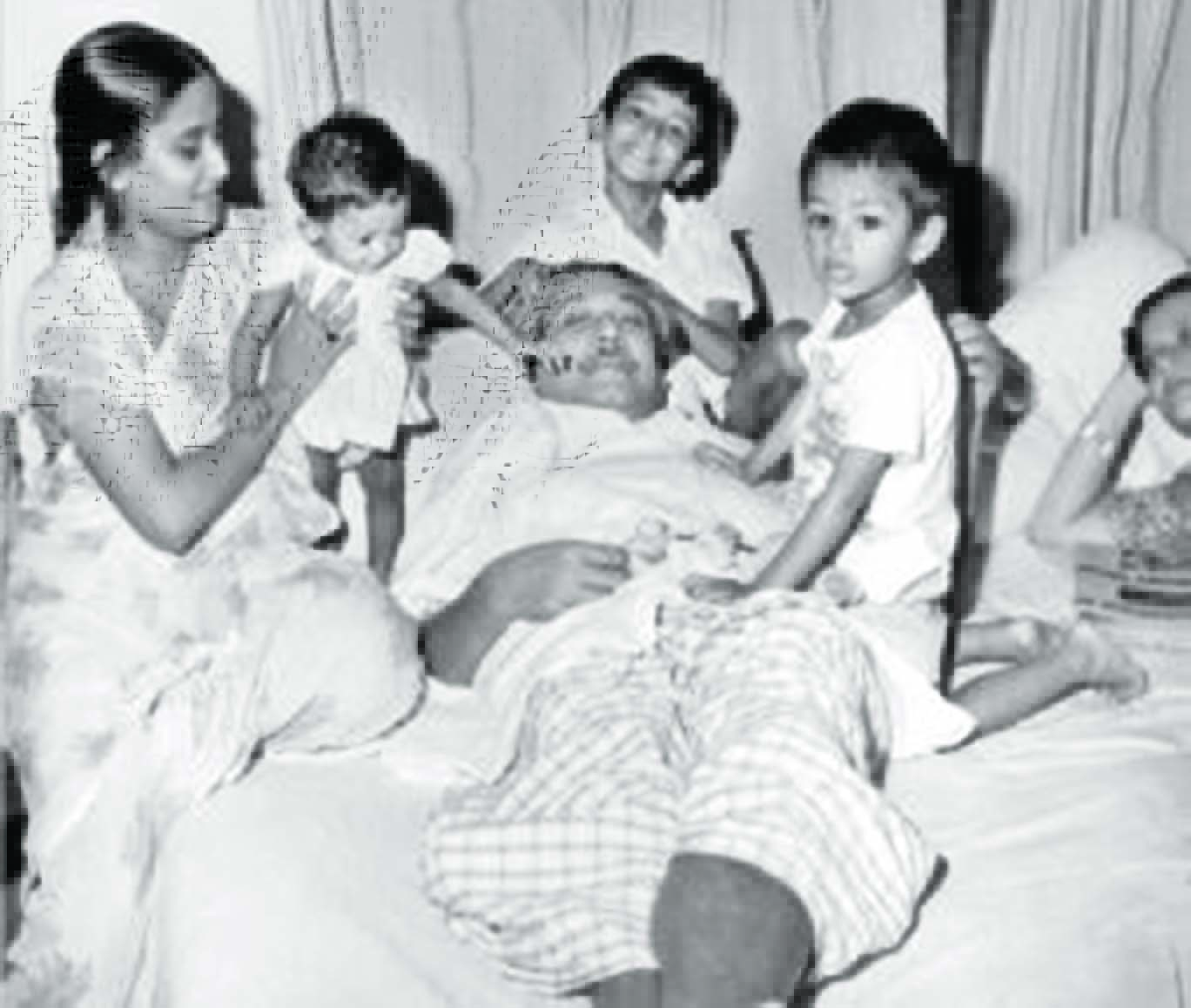 Moment which touched a lot–Joy, Putul, Russell and Sheikh Hasina with Father of the Nation Bangabandhu Sheikh Mujibur Rahman.     -File Photo
Joy’s behavior is very impressive too. I have met Sajeeb Wazed Joy a couple of times. He spoke to me so politely that it overwhelmed me and my family members. He showed no extravagant attitude while talking to me though he belongs to the family of Bangabandhu and his mother is currently Bangladesh’s Prime Minister. Such courteous manner which I saw in Joy is hard to find these days among high-profile dignitaries.
An article of mine appeared in The Asian Age on 19 October 2017 titled “Wright Brothers and right leadership” in which I highlighted the qualities of Sajeeb Wazed Joy and Sheikh Rehana’s son Radwan Siddiq Bobby.
Speeches and activities by Sajeeb Wazed Joy and Radwan Siddiq Bobby are found on social networks which they delivered at different events. All those speeches are enriched with striking ideas which are evidences of the incomparable features these two grandsons of Bangabandhu have acquired. Everyone will be amazed with wonder and appreciation at the scholarly depth of Sajeeb Wazed Joy and Radwan Siddiq Bobby if their words and profiles are neutrally evaluated. Sheikh Rehana’s daughter Tulip Siddiq is a Member of Parliament in the United Kingdom.
Thousands of youths have been inspired by the iconic image of Sajeeb Wazed Joy. Here I would like to name a few Bangladeshi origin youths like Nafees Bin Zafar, Fahim Saleh and Jawed Karim. Nafees Bin Zafar was awarded Oscar in 2007 for his contribution to the development of the fluid simulation system for the movie Pirates of the Caribbean: At World’s End. On the other hand, Jawed Karim is the cofounder of YouTube. Fahim Saleh was the cofounder of Pathao who was recently murdered in the United States. All these young meritorious Bangladeshis are outcome of the luminous technological legacy trail-blazed by Sajeeb Wazed Joy.
World Economic Forum has named Sajeeb Wazed as one of the young global leaders. This is a glowing evidence that Joy’s leadership capability is recognized on international platforms too. Therefore, he should be allowed to get further connected with political affairs for Bangladesh’s betterment. We need someone like him to lead the country towards higher magnitude of development in days to come. It should be remembered that Bangabandhu’s blood runs through Joy’s veins. So, there is no doubt that Sajeeb Wazed Joy has the capacity to become an uncompromising and lionhearted leader like Bangabandhu Sheikh Mujibur Rahman. Joy believes in more work, less words. For this reason he does not celebrate his birthday in a flashy and colourful way.
Wazed Miah is Joy’s father. We can see the reflection of late Wazed Miah’s talent, simplicity and integrity in both of his children Sajeeb Wazed Joy and Saima Wazed Putul who is a prominent figure in the global movement for autistic kids. Recently Saima Wazed Putul has been chosen as a “Thematic Ambassador” by Climate Vulnerable Forum (CVF).
Joy is a magnificently learned man like former American President John F Kennedy once said, “Leadership and learning are indispensable to each other.”
Sajeeb Wazed Joy was born on 27 July 1971 while the Liberation War was going on. Thus the birth time of Joy is inseparably bonded with Bangladesh’s history. Today is Joy’s 49th birthday. I would like to extend my heartfelt greetings, compliments and best wishes to this illuminated young leader. Happy birthday Sajeeb Wazed Joy. God bless you.

Shoeb Chowdhury, The writer is a diplomat,
entrepreneur, author and Chairman of Editorial Board of The Asian Age.

Joy, architect of Digital Bangladesh and sentinel of...

The rising sun of Bangladesh