Bangabandhu: A Leader with Many Virtues

The victory Bangladesh achieved through the nine-month war of liberation under the call and leadership of the Father of the Nation, Bangabandhu Sheikh Mujibur Rahman, is the greatest achievement of the country. Bangabandhu’s daughter, the popular leader and the Honorable Prime Minister of the People’s Republic of Bangladesh, Sheikh Hasina is still working incessantly to accomplish the mission for which the liberation was attained in exchange for much sacrifice and longing. The noble idea and life principle which Bangabandhu Sheikh Mujibur Rahman has left for us will drive the Bengali nation to a golden path forever. The prominent poet Annada Shankar Ray aptly said: “As long as the Padma, Meghna, Gouri, Jamuna flow, Bangabandhu Sheikh Mujibur Rahman, your accomplishments will live on.” The life and work of the Father of the Nation Bangabandhu Sheikh Mujibur Rahman exemplify the very best leadership qualities that human beings can exhibit – qualities that we as a society wish to see in our leading citizens. In him, we find perfect examples of patriotism, humanity, respect for political as well as academic gurus, deft leadership skills, tireless efforts, the art of oratory, admirable personality, integrity, honesty, and fearlessness, all of which made him the greatest Bengali of a thousand years. 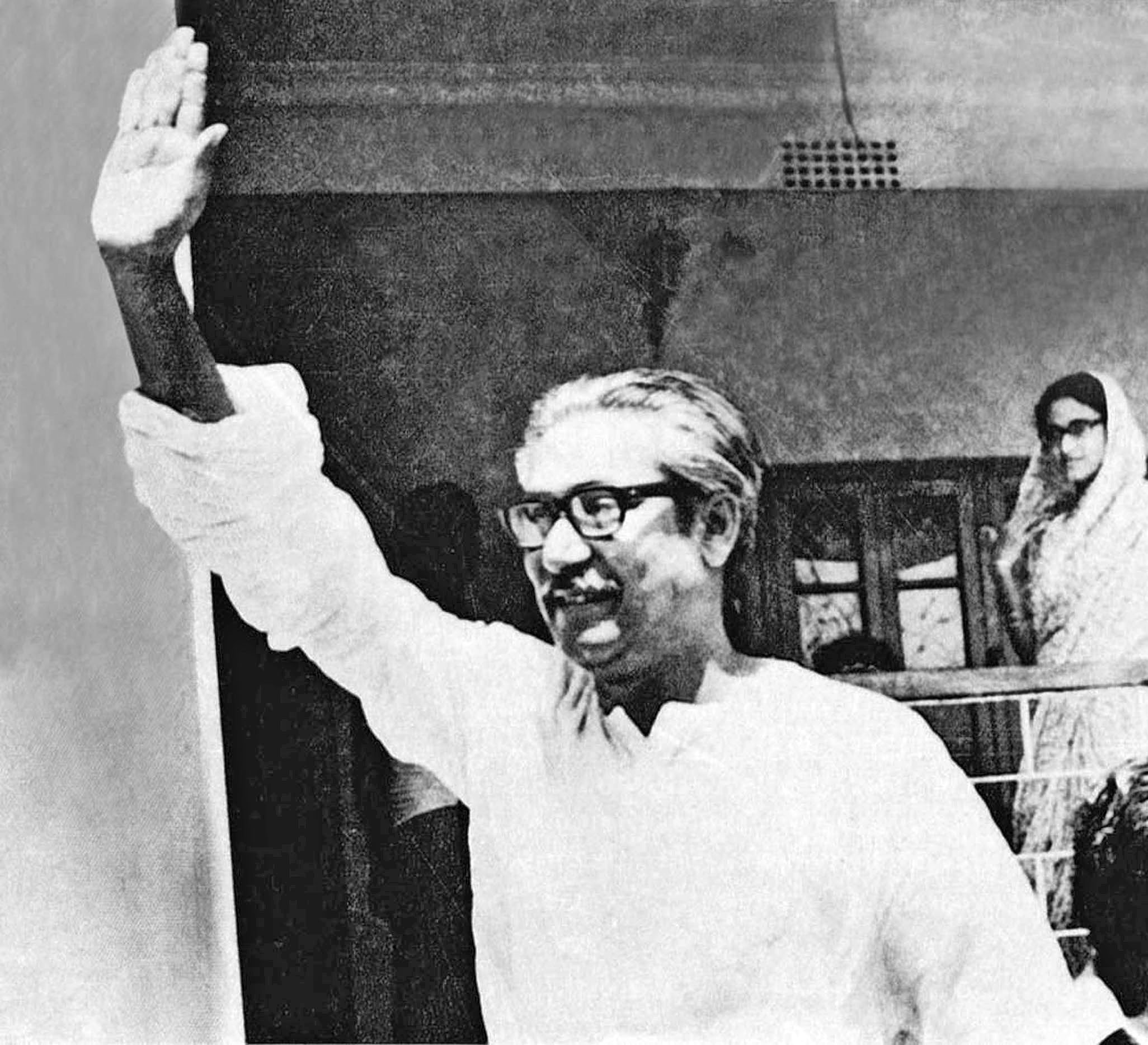 Bangabandhu Sheikh Mujibur Rahman was multitalented and multidimensional. So if we are to know our Father of the Nation, we have to learn a lot from history. There is a proverb ‘Morning shows the day’ that means going by the character traits of a child, we may have an idea about his/her future. This was all the more true in respect to Bangabandhu Sheikh Mujibur Rahman. If we take a look at the childhood of Bangabandhu, we can see he was talented in many ways. For example, he was a very good swimmer. Besides, he could play football exceptionally well which helped him earn a firm place in the school football team. From a very early age, he exhibited his love for the deprived people. Young Mujib used to bring his friends home and insist on his mother to give them food. Besides, he would invite disadvantaged children from his school and feed them. One of his poor school friends had no umbrella, so Mujib gave his umbrella to that friend while he returned home getting drenched in rain. In another instance, he, while en route to school, noticed that an aged woman was shivering in the cold sitting under a tree. Then he helped the woman by giving her his shawl. After witnessing such benevolent activities, his mother used to become amazed, kiss him on his forehead and bless him.

From his tender age, it was evident that Sheikh Mujibur Rahman possessed an extraordinary talent. Once, he doled out paddy from the warehouse of his home among the poor. When his father Lutfur Rahman asked him about it, he replied, “This year, all the crops of the sharecroppers have been washed away by the flood. Farmers are facing severe hardship. Like us, they too feel hungry. They want to live like us. His father was very pleased to see his son’s honesty, courage, and benevolence. In this way, Sheikh Mujibur Rahman has won the heart of the poor and destitute.He also made the mark of his inherent revolutionary spirit when he was a high-school student. Once, Prime Minister of undivided Bengal Sher-e-Bangla AK Fazlul Huq and Minister Huseyn Shaheed Suhrawardy came to visit Gopalganj Missionary School. Young Mujib represented the students of the school in raising their demands. He said, “The condition of our school hostel is very bad. We need money to repair it.” Initially, Sher-e-Bangla AK Fazlul Huq was taken aback by the boldness, straightforward speech and benevolence of young Mujib. Then he asked, “How much money will be required for repairing the hostel?” “1200 taka”, Mujib replied. Sher-e-Bangla AK Fazlul Huq arranged the amount of money immediately for renovating the hostel.

In 1948, Sheikh Mujib founded East Pakistan Muslim Chhatra League. In the same year, he got himself involved in ‘All-Party Language Action Committee’ and was arrested and incarcerated on 11 March while enforcing a general strike to press home the demand for making Bangla a state language. Later he was released when Nazimuddin’s government of East Bengal reached an agreement with the All-Party Language Action Committee on the theme that ‘The East Bengal Assembly will accept a proposal recommending the Central Government to make Bangla the state language of Pakistan.” In 1949 when Awami Muslim League was formed, he was made Joint Secretary and then in 1953, he was elected General Secretary of the party. Bangabandhu Sheikh Mujibur Rahman contested in the first general election of Pakistan in 1954 as a candidate of the United Front (Jukto Front) and became a member of the provincial legislature. He was made minister for Agriculture and Forests when the new provincial government of Jukto Front was formed. Overall, he was arrested many times for his active involvement in protest to establish the rights of the people.

In 1966, Sheikh Mujib pronounced the historic six-point programme which is considered to be the charter of independence for the Bengalis. From that point in time, he was being arrested frequently under national security law and was made the key accused in the infamous Agartala Conspiracy case.

However, in the face of a mass upsurge in 1969, the conspirators caved in and released Sheikh Mujib. And then on February 23, 1969 ‘Chhatra Sangram Parishad’ arranged a mass reception programme attended by hundreds of thousands of people at Racecourse Meydan where Tofail Ahmed bestowed the title of Bangabandhu on Sheikh Mujibur Rahman.

In the general election of 1970, we once again get proof of Bangabandhu’s towering popularity. In that election under the leadership of Bangabandhu, Awami League had won 167 seats out of 169 in the parliament. But instead of handing over the power to Bangabandhu, Pakistani rulers resorted to conspiracy. In such a situation, Mujib called for freedom from the clutches of conspirators. On 7th March 1971, he delivered an 18-minute speech to an audience of over one million at the then Racecourse Meydan (current Sohrawardi Uddan). In emotion, message and guidelines, the speech was truly unique. On 5 April 1971, the Newsweek magazine of the USA portrayed Bangabandhu as “the poet of politics”. Some compare the historic 7th March speech of Bangabandhu with the Gettysburg speech that U.S. President Abraham Lincoln delivered during the American Civil War. UNESCO on October 30, 2017, recognised Bangabandhu’s 7th March speech as one of the best speeches of the world and recorded it in the ‘Memory of the World Register’.

Bangabandhu was an exemplary person for all times, for all people. His leadership traits flourished naturally from his constant thought of the rights and wellbeing of his people, for which he is called a ‘Charismatic leader’ with the very best leadership qualities. He personifies the famous saying of John C. Maxwell “A leader is one who knows the way, goes the way and shows the way.”Bangabandhu’s historic 7th March speech will remain a source of inspiration for us to fight injustice for generations to come. His thunders voice aroused the Bangalees on that day, as he said, “This time the struggle is for our freedom. This time the struggle is for our independence. Joy Bangla.” He announced a civil disobedience movement, calling for “Every house to turn into a fortress. You must prepare yourselves now with what little you have for the struggle ahead. Since we have given blood, we will give more of it. But, Insha’Allah, we will free the people of this land!” Here, by saying “what little you have” he meant if one doesn’t have arms and ammunition, one can fight the enemy with strong willpower and love for the country. This must be the best of all speeches delivered to liberate any country in world history.

On the dreadful night of March 25, 1971, the Pakistani military unleashed a reign of terror on unarmed Bangalees. In response, Bangabandhu Sheikh Mujibur Rahman declared the independence of Bangladesh in the first hour (12.5 am) of 26 March. Around 1 am, the Pakistani military arrested Bangabandhu and subsequently took him away to Pakistan. Even though Bangabandhu was physically separated from his people, his call for independence inspired Bangalees to wage a full-scale war against Pakistanis to liberate the country.

On 17 April 1971, the Government of the People’s Republic of Bangladesh was formed and Bangabandhu was made President and Commander-in-Chief despite his absence. After the formation of the first government at Vaidyanathtala in Meherpur district it was made the temporary capital of Bangladesh and then was renamed Mujibnagar.

Bangabandhu always held the honour of his motherland dear to his heart and always gave it a priority. It was learnt that in the middle of the night on 24 December 1962, he met Indian diplomat Sashanka S Banerjee and gave him a letter addressed to the then Indian Prime Minister Jawaharlal Nehru. He told Mr. Banerjee, “I’m seeking India’s support based on mutual respect and friendship on the question of liberty. I’m neither bowing down nor begging.” Such was the height of his personality that student activists and mass people became spellbound to his leadership. Mr. Banerjee, who maintained a very good relation with Bangabandhu, said, “Such a handsome man with powerful public speaking skill, immense courage, realistic views, patriotism, and yet a humble leader was unprecedented in world history.”

Bangabandhu had a dream of building golden Bangladesh. But he did not think of golden Bengal in terms amassing a lot of wealth. He dreamt of building such a state where the people will have no poverty. Where there will be no animosity, conflict and disparity among the people. It would be a secular country where people of all religions including Hindu, Buddha, Christian and Muslims would live together. Communal harmony would persist with no disparity between the rich and the poor.

We get the reflection of all the virtues in Bangabandhu which make a person reach their fullest potential. And that is why we adore, admire and follow the ideals of this great leader. As long as the independent country will last, Bangabandhu’s ideals will offer a guiding light to the nation. Neither as fleeting as a meteor nor like a comet that vanishes as suddenly as it appears, Bangabandhu is as constant as the North Star in the political horizon of the Bengal.

Days before his death, Pranab Mukherjee penned an...