The 1952 language movement was by any definition a mass movement and the students of Dhaka University and other educational institutions of Dhaka city acted as the torch bearers of the movement. Sheikh Mujibur Rahman was one of the few student leaders who played the major role in shaping the movement into a mass movement in order to make it broad- based for establishing Bangla as one of the state languages of the then Pakistan.

In fact, the demand for establishing Bengali as one of the state languages of Pakistan got momentum on March 21, 1948 when Mr. Mohammad Ali Jinnah, the founding father of Pakistan, made the inane declaration at the public meeting held at the then Race Course Maidan, now Suhrawardy Uddan that Urdu and Urdu alone would be the state language of Pakistan. This declaration of Mr. Jinnah did not go unchallenged and an instant reply of “NO” came from a few students of Dhaka University. 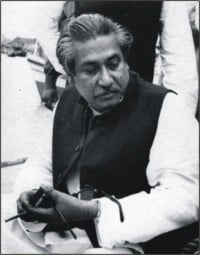 The progressive student fronts and the educated section of the people had from the beginning been expressing their anger and dissatisfaction over the government opposition to accepting Bangla as one of the state languages of the country. Protesting the government regressive act in regard to this logical and just demand of the people of East Pakistan, strike was observed on February 26,1948 and the students of Dhaka university and other educational institutions paraded the main streets of Dhaka city.

After the successful strike a meeting was held in the afternoon which was followed by a grand procession. Prof Abul Kashem presided over the meeting while Sk Mujibur Rahman led the grand rally. Student leaders and some teachers of Dhaka University addressed the meeting expressing their firm determination to continue their all out efforts to make the movement a success.

The strike was followed by a meeting at Fazlul Huq Muslim Hall. The activists of different socio-cultural-political organizations who subsequently joined the language movement were present at the Fazlul Hauq Hall meeting. Sk Mujibur Rahman, Shamsul Huq, Oli Ahad, Mohammad Toha, Abul Kashem, Ranesh Das Gupta and Ajit Guha were prominent among the student leaders who attended the meeting. The meeting decided to wage greater movement against the anti-language activities of the government and in view of this an All Party Action Committee was formed to strengthen the movement. The Gono Azadi League, Democratic Youth League, Ganatantric Jubo League, East Pakistan Muslim Students League, Tammadun Majlish, Students unions of all the residential halls and some other organizations nominated two representatives to join the All Party Action Committee (APAC). Sheikh Mujibur Rahman played a significant role in spreading the movement into a mass movement in order to make it more effective, broad based and successful.

The next major programme of the movement was the hartal on March 11, 1948 under the auspices of the students of Dhaka University and other educational institutions. Several tough action programmes were chalked out on that day as follow-up programme. As a result, the provincial government became shaky. Number of repressive measures were taken by the government.. Police arrested several student leaders including Shawkat Ali, Kazi Golam Mahboob, Shamsul Huq, Sheikh Mujibur Rahman and Oli Ahad and sent them to the Dhaka central jail.

As a result, the government was compelled to release all the student leaders. A big meeting of the students body was held on March 16,1948 with Sheikh Mujibur Rahman in the chair. The meeting took a number of bold decisions to force the government to accept their demand without further delay. According to the diary of Tajuddin Ahmed, one of the active participants of the language movement who later became Prime Minister of the Mujibnagar government, “After the meeting a student procession went to Khawaja Nazimuddin with a representation containing their demands and the procession was led by Sheikh Mujibur Rahman”. According to some sources, the student leaders were able to convince Khawaja Nazimuddin to accept their demand and he agreed to send a recommendation to the central government in favour of the demand of the students. But the central government instantly turned down the recommendation of Khawaja Nazimuddin.

Mujib worked relentlessly from the beginning to organize the youth force in shaping the language movement as a mass upheaval. A meeting of the All Party Action Committee was held at Dhaka District Bar library on January 31,1952 and was attended by people from all strata of life, including students, political leaders and intellectuals. Some local people also attended the meeting and extended their support to the language movement.

In fact, the language movement was the beginning of the beginning of our war of independence led by Bangabandhu Sheikh Mujibur Rahman in 1971. Starting with the Ekushey movement Sheikh Mujib continued his relentless fight against the oppression and economic deprivation by the Pakistani rulers in every ways and in every sector. .He did not hesitate to take full advantage of any and every forum to voice the grievances of the people of East Pakistan and put forward their demands strongly and logically.

Held under the chairmanship of the Deputy Speaker, Mr. C.E. Gibbon, to discuss the state language of Pakistan, Sheikh Mujibur Rahman categorically pointed out that it would be the duty of the federal and provincial governments to take all possible measures for the development and growth of the two state languages, namely Urdu and Bangla. “Everybody in East Pakistan wants that Bengali and Urdu shall be the state languages of Pakistan from today and onwards,” he told the House.

While speaking in the House, Sheikh Mujibur Rahman recalled the sacrifices and sufferings undergone by the students of East Bengal as a result of which about fifteen hundred people had gone to jail. In the end, he added, the government recognized their demand on account of the force of public opinion and accepted Bengali as one of the state languages.

While referring to his demand for the development and growth of the state languages appropriately, Sheikh Mujib mentioned, “I remember to have gone to China in 1952, three years after their liberation in 1949, and was impressed by the manner in which they had substituted Chinese during that small period. The same thing could be done here. It may take two years or three years or a little more”.

In fact, Bangabandhu Sheikh Mujibur Rahman as Prime Minister of Bangladesh initiated a number of bold steps to introduce Bengali in every sphere of our life in a befitting manner. On the occasion of the observance of the first Ekushey February in independent Bangladesh in 1972, he called upon the intellectuals, writers, educationists and poets to faithfully reflect the hopes and aspirations of the masses. He also appealed to the writers to express themselves freely for the benefit of the people and for the enrichment of the Bengali language and culture.

Zahid Hossain is a political analyst.

In memory of Language Movement and Bangabandhu