15 August: Shame darker than the night

It was around 3:00am of August 15, 1975.. Preparations for carrying out a barbaric assassination were almost done.

Major Syed Faruk Rahman, one of the masterminds of the massacre, was sitting on a stool in front of the lancer unit headquarters in Dhaka Cantonment. An operation map was open on his knees. Execution of which would send a massive blow to the newly independent Bangladesh. Major Khandaker Abdur Rashid, another mastermind, was standing beside him.

Major Faruk stood up from his stool and started delivering a speech to the soldiers gathered there, said Lt Col (retd) Muhiuddin Ahmed, one of the convicted killers of Bangabandhu, in his confessional statement.

“A new government would be formed under the leadership of Khandaker Mushtaque Ahmed by ousting Sheikh Mujibur Rahman. This will be an Islamic government,” Faruk told the gathering.

He instigated the armed troops by making speech against the Bangabandhu government and formation of Baksal and Rakkhi Bahini. He also spread the false allegation that the government had planned to disband the army.

At the end of his speech, Faruk, according to Muhiuddin, gave the final briefing to the disgruntled soldiers.

A few hours before, around 11:30pm of August 14, they had collected arms and ammunitions from the armoury of the 2nd Field Artillery. Nayek Jamrul, who was in charge of the armoury that night, described how they forced him to open it for them.

Accompanied by 10 to 12 soldiers of the artillery and lancers Major Rashid and Captain Jahangir went to the armoury. Major Rashid ordered the guards to unlock it.

The soldiers immediately swung into action, taking rifles, cannon shells, Sten guns, submachine guns, light machine guns, pistols and revolvers in large numbers. Then the armoury was locked again on the orders of the major, said Jamrul, one of the witnesses in the Bangabandhu murder case, in his statement.

Everything was going unhindered according to their well laid out plan.

After Faruk’s briefing, soldiers left around 4:00 in the morning and around one hour later, under leadership of Faruk, tanks rolled down the empty streets to their destination — Bangabandhu’s residence on Dhanmondi Road-32, according to the confessional statement of Faruk.

Thus, the operation began with the aim to establish the “Islamic government” under leadership of Mushtaque by ousting Bangabandhu from power. 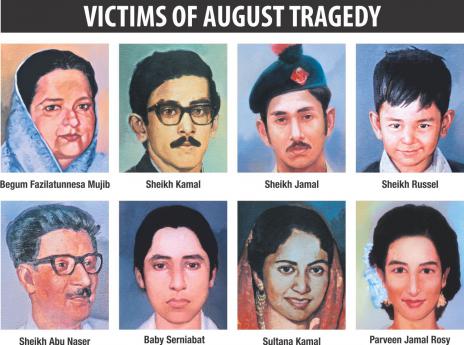 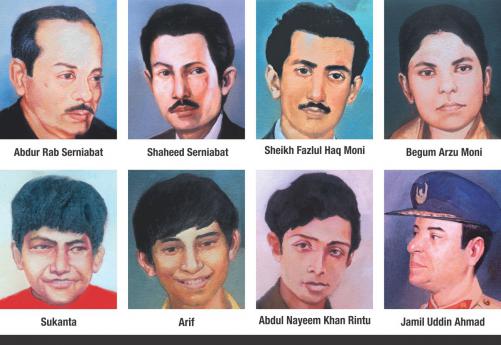 Bangabandhu appeared as a leader of freedom in international politics with the emergence of independent Bangladesh. In the bipolar world, he opted for socialism and staying in the Soviet block.

His strong stance on holding trial of war criminals particularly around 200 Pakistan army officers annoyed the then Pakistani rulers who were enjoying the blessing of then US administration.

In the country, the political situation was volatile.

There was political turmoil and deterioration of law and order mainly due to anti-government subversive activities by Jatiya Samajtantrik Dal and Sorbohara Party.

The three-and-a-half-years old government of Bangabandhu could not stand on a firm footing partly because of this turmoil.

The conspirators took the advantage of the situation. They decided to go ahead with their plan on which they had been working for a long time. For example, in May 15, 1974, Major Faruk, on the directive of a senior army officer, sought assistance from the US government through the US embassy in Dhaka.

The US ambassador Davis Eugene Boster forwarded the message to the US State Department in a secret letter sent to Washington, according to the book Mujib Murder in US Documents by Mizanur Rahman Khan.

Meanwhile, some army officers including Major Dalim and Major Noor, who were dismissed for violation of discipline at the end of 1974, were annoyed with the government and joined hands with the conspirators.

Major Rashid was maintaining contact with Khandaker Mushtaque Ahmed, the then commerce minister, all along, according to Major Faruk’s confessional statement.

Rashid convinced the other conspirators that Baksal must be taken down by any means. If needed Mujib should be killed otherwise the country and the nation would not survive. Rashid assured them of having Ziaur Rahman on their side if they were to eliminate Mujib, said Faruk in his confessional statement.

With Mushtaque on board, the conspiracy started gathering political momentum.

They started holding more meetings to finalise their plans.

In his confessional statement, Taheruddin Thakur, one of the conspirators of the assassination, described how they finalised the plan.

In May or June of 1975, they decided to meet on the Shalna High School ground of Gazipur on the occasion of a conference of self-reliant movement of Dhaka division.

They talked to Mushtaque. He wanted to know of their progress. They informed him that everything was moving along as planned, said Taheruddin.

The conspirators decided to get together the night before for executing their plan in the early morning of August 15.

Dawn had not broken yet. President Sheikh Mujib, his wife Begum Mujib, their sons Sheikh Kamal, Sheikh Jamal and Sheikh Russell, daughters-in-law, and his brother Sheikh Naser were supposed to be in sleep.

Sheikh Kamal came down to the ground floor. He requested the army and police members to come with him, said AFM Mohitul Islam, personal assistant of Bangabandhu, in his statement in Bangabandhu murder case.

He was on duty at the residence then.

At that moment three to four soldiers in khaki and black fatigues stormed the premises. One of them was Captain Huda, who shot Kamal. As Kamal divulged his identity, Huda shot him again, said on duty security guard Habilder Kuddus in his statement.

Huda and Noor saw Major Muhiuddin and his soldiers leading Bangabandhu down.

“What do you want?” Bangabandhu had asked.

The two majors, according to Wazed Mia, told Mujib to go to the radio station and announce his resignation.

Suddenly, Huda and Nur aimed their Sten guns at Bangabandhu and pressed the triggers, said Kuddus.

The president collapsed on the stairs. His body lay there with blood flowing from the body to down the stairs.

After killing Bangabandhu, the soldiers ran amok. Bangabandhu’s family members had taken shelter inside the bathroom of the master bedroom.

They were not spared.

A new chapter unfolded in the history of Bangladesh taking the country backwards.

The killers installed Khandaker Mushtaque, the commerce minister of Bangabandhu’s government, as the president in the afternoon.

Mushtaque, who had lost his foreign ministry portfolio after the Liberation War for his secret link with the CIA and secret negotiations to scuttle the Bangladesh Liberation War, showed his true colours again.

As president Zia kept following the footsteps of Mushtaque, he paid no heed to the demand for trial of the killers of Bangabandhu. He kept the 1975 Indemnity Ordinance in effect.

President Ershad who grabbed state power in March 1982 also followed his predecessors. He continued to rehabilitate war criminals in politics and kept ignoring the demand for trial of the killers of the father of the nation.

The situation changed only after the Awami League returned to power in 1996. The AL-led government scrapped the Indemnity Ordinance of 1975 and opened the door for the trial.

Justice finally came but the nation still suffers from the chaotic political situation created after the assassination of Bangabandhu.

The politics of killing brought no peace and stability in the country. It changed the discourse of politics.

After the assassination, a battle for power began within the army. Two more coups took place in quick succession on November 3 and 7.

There was no bloodshed in the November 3 coup. But later that night, Syed Nazrul Islam, Tajuddin Ahmed, M Mansur Ali and Qamaruzzaman, who had led the Mujibnagar government to liberate Bangladesh, were brutally murdered in prison.

What Major Faruk said in his briefing before the attack on Bangabandhu’s residence about the objective of the operation — to form an Islamic government — came true as their appointed president Mushtaque started working according to the plan.

Pakistan was the first country that recognised the government led by Mushtaque, who dreamt of turning Bangladesh into an Islamic Republic like Pakistan. When he was president, Mushtaque also wanted to improve relations with Pakistan.

Mushtaque’s successors Justice Sayem and Gen Ziaur Rahman did not frustrate the dream of Major Faruk. During their regimes, the constitution was amended through martial law proclamations to omit secularism from it and to replace secularism with “absolute trust and faith in Almighty Allah”.

The constitutional restriction on the use of religion in politics was withdrawn allowing some anti-liberation Islamic political parties and organisations, including Jamaat-e-Islami, to resume their activities.

The regime-led by Gen Zia began a policy of rehabilitation of war criminals. He made Shah Aziz, who opposed Bangladesh’ birth, prime minister of his government.

The BNP, the party he founded, has been following his policy. Anti-liberation Abdur Rahman Biswas was made president in 1991. Two more war criminals Matiur Rahman Nizami and Ali Ahsan Mohammad Mojaheed, chief and secretary general of the Jamaat-e-Islami were made ministers by Zia’s widow Khaleda Zia in her government in 2001.

Assassination of Zia, while in office in 1981, brought in another spell of martial law. Gen Ershad, the then army chief, grabbed state power overthrowing the then president Justice Abdus Sattar in March 1982.

Gen Ershad also continued using religion to consolidate his position. He took a step further and gave Islam the status of state religion in 1990.

Islamic political parties and organisations mushroomed since the constitutional ban was repealed in 1976, allowing formation and functioning of organisations based on religion.

Between 1964 and 1970, intelligence records claimed the existence of 11 Islamic parties involved in various activities. But since 1976, floating of such parties and organisations increased many folds.

The use of Islam as a political mobilisation tool did not yield positive results.

Take the example of one militant outfit. Thousands of Bangladeshi youths went off to fight in Palestine, Kashmir and Afghanistan in the 1980s and 1990s.

A group of Bangladeshi Mujahideen returnees from Afghanistan in a press conference at the Jatiya Press Club in Dhaka on April 30, 1992 declared the establishment of Harkat-ul Jihad, Bangladesh or HUJI-B.

It emerged as a militant outfit and has been accused of being directly involved in the assassination attempt on Sheikh Hasina and carrying out attacks on the country’s cultural symbols and sites, including Pahela Baishakh celebrations, monuments and cinema halls.

The use of religion, according to security experts, possibly served as the foundations for such rise in militant activities.

The current escalation of militancy has a root in the use of religion to form political parties and organisation that began after the assassination of Bangabandhu, they said.