Forty-four years after his assassination, the popularity of the country’s first president and undisputed leader of the Bengali nation, Bangabandhu Sheikh Mujibur Rahman, continues to increasing rapidly not only in the country, but also around the world.

In Bangladesh, the young generations, especially students of schools across the country, want to grow up with the ideology of Bangabandhu Sheikh Mujibur Rahman to serve the country as honest and visionary politicians in the future.

Recently, 19,200 Shishu Bangabandhu (Children Bangabandhu) from 128 schools and colleges delivered Bangabandhu’s historical March 7 speech simultaneously, wearing the “Mujib jacket”, to make the dream of the Father of the Nation come true.  After delivering the historic speech, the students, taking on the role of ‘Little Bangabandhu’, told reporters that they want to serve the country like the great leader.

People of different countries are studying and knowing Sheikh Mujib, as his unprecedented sacrifice, dedication, and visionary plans have been spreading across the globe over the years. Recognising Sheikh Mujibur Rahman’s life and work, many world leaders spoke of him highly.

One of them, the late Cuban leader Fidel Castro had once said: “I have not seen the Himalayas. But I have seen Sheikh Mujib. In personality and in courage, this man is the Himalayas.”

Former prime minister of India, late Indira Gandhi had said: “I’m broken by the news of Sheikh Mujib’s death. He was a great leader. His extraordinary heroism has been a source of inspiration for the people of Asia and Africa.’’

All this information is from the “Bangabandhu Online Archive”, a Facebook page which has over a million followers. The Facebook page, started a few years ago, is a treasure trove of the nation’s history. It has posts on several historical events on Bangabandhu, about his famous speech on March 7, his six-point charter, his homecoming day on January 10, 1972 and many more. The Independent found that the page has 1,620 rare photographs of the country’s Liberation War, Bangabandhu’s rally, and his camaraderie and meetings with several important historical figures.

The page has an album titled “August tragedy”, which has several of Bangabandhu’s important quotes that he delivered on different occasions. However, the most attractive part of the Facebook page is a collection of video messages that people from all walks of life, irrespective of their colour and creed, sent about Sheikh Mujibur Rahman. For example, a person named Anwar Hossain said in a video message that if Bangabandhu were not there, there would not be any country on the face of earth named Bangladesh.

Sabekun Ruma, a resident of Rampura, said in a video message: “I feel immensely proud that Bangabandhu is our leader. He is the best leader in the world’s history.”

There are thousands of comments on this video series uploaded by common people, which shows the people’s love, affection and respect for Bangabandhu. People have also expressed their gratitude and well wishes in the comment section of the videos.    Those who are behind this archive want to carry on their good work by remaining incognito, but they are open to take and publish any story on Bangabandhu, provided the story is factually correct and has historical significance.

Bangabandhu and almost his entire family were killed by some unruly army personnel at his residence on August 15, 1975.

Bangladesh is going to celebrate “Mujib Borsho” (Mujib Year) from March 17, 2020 to March 26, 2021, aiming to present the life and work of Bangabandhu before the people. 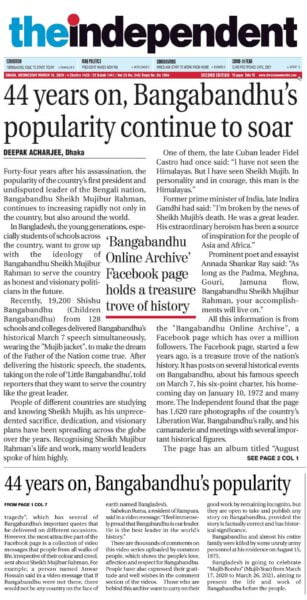